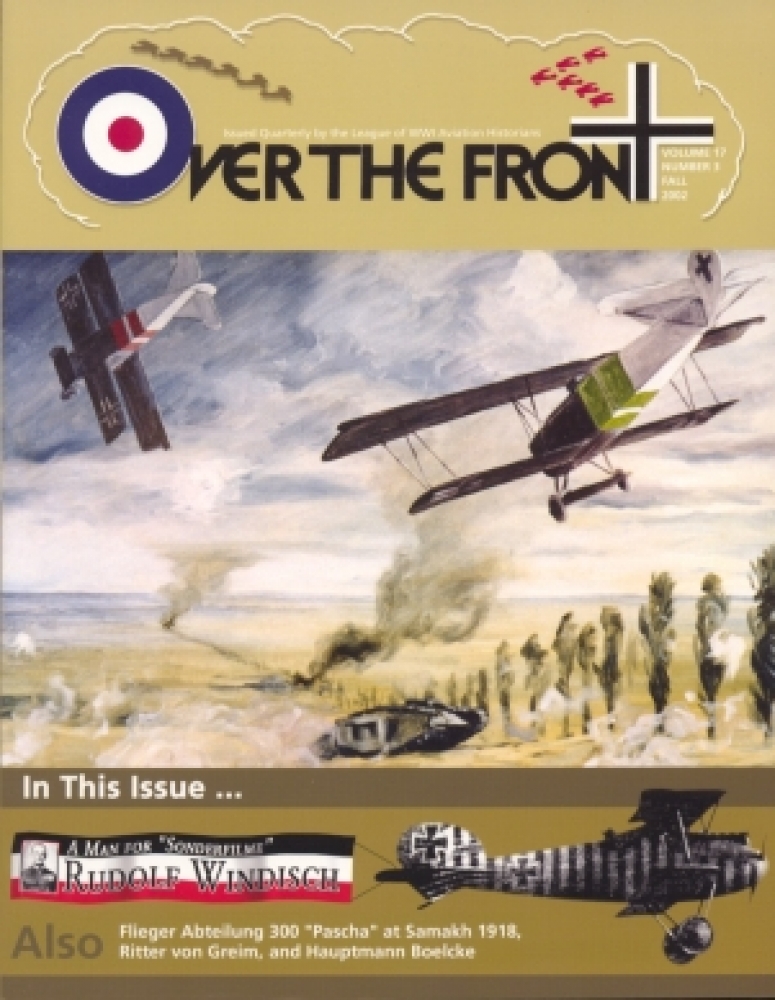 This evocative scene of two Fokker D.VIIs of Jasta 34b attacking a tank was painted by noted Bavarian fighter ace Rudolf Stark. Besides being an accomplished pilot and Jasta commander, Stark was a gifted writer and artist whose paintings, though done some years after WWI, faithfully record his impressions of his own expereinces and those of other Bavarian airmen. This work illustrates the aircraft of Obltn. Robert Ritter von Greim (at left, with two red bands on the whitish-silver fuselage) and Vzfw. Johan Pütz (with two green bands as personal insignia) as they assault British tanks on 23 August 1918. After the war, Greim would write about this action as part of his article "During the Defensive Battle on the Somme," which has been translated by O'Brien Browne and is presented in this issue. (Curtesy of Bayerisches Armeemuseum and O'Brien Browne)

A Man for Sonderfilme: Rudolf Windisch by Hannes Täger
The wartime career of Dresden born Friedrich Otto Rudolf Windisch who progressed from willing participant in daring 'Sonderfilme' (special films) on the Russian Front to commanding officer of Jasta 66. Special Note: the back cover of this issue displays profiles of 4 of Windisch's planes by Robert Pearson.

The Schmetterling Farm: FA 300 "Pascha" at Samakh by Dov Gavish
A descripton of the interactions between the German personnel of Flieger Abteilung 300 and the nearby Jewish settlement of Samakh in Palestine. Profusely illustrated.

During the Defensive Battle on the Somme by Hptm.a.D Robert Ritter von Greim
From the diary of Bavarian Jagdstaffel 34. Originally published as Wä;hrend der Abwehrschlacht an der Somme in the anthology 'In der Luft unbesiegt', edited by Georg Paul Neumann Mü;nich: J.F. Lehmanns Verlag, 1923, pp. 201-209. Translated by O'Brien Brown, line art by the late George Evans.

A Snapshot of Boelcke by Lance Bronnenkant
A side-by-side comparision of a contemporary newspaper article about Boelcke by Herbert Bayard Swope and a chapter from a later book published by the same author.

Further Glimpses of Boelcke by Greg Van Wyngarden and Aaron Weaver
A photographic retrospective of the famed airfighter.