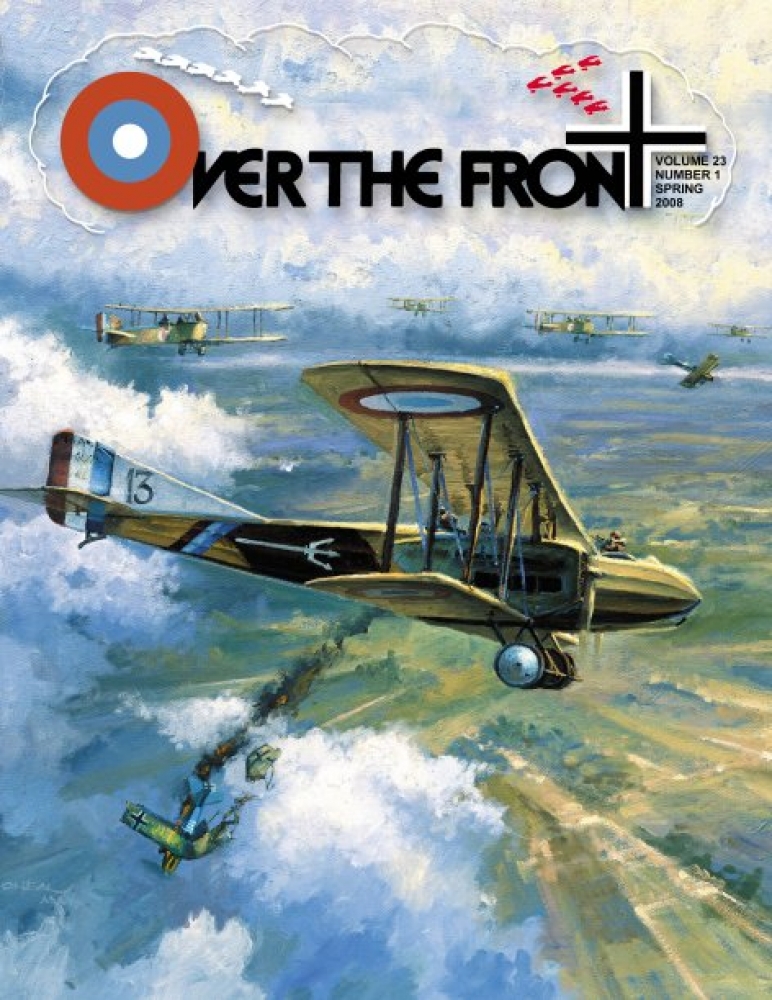 Front Cover: "Valentine’s Day" is the appropriate name of this beautiful Mike O’Neal painting. It depicts Lt. Valentine Burger’s 11 August 1918 victory over Jasta 19’s 22-victory Staffelführer, Ltn.d.L. Hans Pippart. During this fight, Burger’s Caudron R.11 dove into a formation of six Jasta 19 Fokker D.VIIs that were attacking Breguet bombers of Escadrille Br.17 over Noyon, France. Although Burger and his two fellow crewmen didn’t know the identity of their victim, they knew he "must have been an ace, as he had four lines around the fuselage of his machine, denoting that he had at least 20 Allied planes to his credit". Courtesy of Mike O’Neal
Inside Front Cover: Naval Aircraft of WWI Profiles by Ronny Barr: Hansa-Brandenburg W.13 (K305); Hansa-Brandenburg W.13(K386); Sopwith Pup (N6453); Sopwith 2F1. Ship's Camel (N6602).
Inside Rear Cover: KuK Seeflieger profiles by R.N. Pearson: Lohner Type TL (L121); Hansa-Brandenburg FBU (K170); Weichmann (Phö;nix-built)(K202).
Outside Rear Cover: Rumpler C.X Profile/Top by R.N. Pearson.

The Observer: The Memoirs of Valentine J. Burger Pt. I Compiled & Transcribed by Al Roesler, Michael O’Neal, Frank Bailey
"I have tried to keep a careful record of my daily doings ever since I left the Infantry to go with the Air Service. While it is true that I have left out, on purpose, many of the wild escapades we chaps went on, I feel that they are of a very personal nature and are not for the eyes of the gentle reader."

B-Boats vs. L-Planes in the Adriatic by James A. Pratt III
While the British B boats experienced minimal action against enemy shipping, they did have a number of run-ins with Austrian naval seaplanes. The first such encounter was on 11 November 1915 off Punta Salvore, southwest of Trieste.

From the Albums: Austro-Hungarian Lohner Type T by Aaron Weaver
A photo essay.

The Evolution of Naval Aviation Carrier Technology Through World War I by Midshipman Daniel Ruffin
This article was adapted from the 2007 winner of the Mike Carr Student Paper Competition. This winning paper was the result of a research paper assigned to the author in his Naval History class at the U.S. Naval Academy.

Soaring Like Eagles into New Heavens: American First World War Aviation Monuments and Memorials (Part II) by Michael Barton
Part I appeared in the Fall 2007 issue of Over The Front.

Between the Lines
Contributors | Something New in the Air? | Binder Orders

Between the Bookends:
Malaula! The Battle Cry of Jasta 17 by Julius Buckler | Early German Aces of World War I—Osprey Aircraft of the Aces No. 73, text by Greg VanWyngarden and artwork by Harry Dempsey, | Bristol Fighter Aces of World War I—Osprey Aircraft of the Aces No. 79, text by Jon Guttman and artwork by Harry Dempsey | Park—The Biography of Air Chief Marshal Sir Keith Park by Vincent Orange, | Curtiss H.12 Windsock Datafile No. 125 by C.A. Owers | Windsock Worldwide, Vol. 23, No. 5, | Cross & Cockade International Journal, Vol. 38, No. 3, 2007 | Mein Lieber Hans—Feldbriefe einer Mutter 1914-1917 [My Dear Hans—Wartime Letters of a Mother 1914-1917] compiled and annotated by Thorsten Pietsch | Under the Guns of the Red Baron—The Complete Record of Von Richthofen’s Victories and Victims Fully Illustrated by Norman Franks, Hal Giblin and Nigel McCrery | Rittmeister—A Biography of Manfred von Richthofen, text by Jim Wilberg and artwork by Steve Anderson | World War I in Cartoons by Mark Bryant | Das Propellerblatt—Journal of the Interessengemeinschaft Luftfahrt 1900-1920 | Australian Hawk Over the Western Front: A Biography of Major R.S. Dallas by Adrian Hellwig | War on the Western Front: in the Trenches of World War I, edited by Dr. Gary Sheffield | The Public Schools Battalion in the Great War: A History of the 16th (Public Schools) Battalion of the Middlesex Regiment (Duke of Cambridge’s Own) August 1914 to July 1916 by Steve Hurst

Mentioned in Despatches
A Matter of Opinion | Vernon Castle’s Grave | Going Dutch | Don’t Be Shy | Questions about 'Over The Front' from Across the Pond?