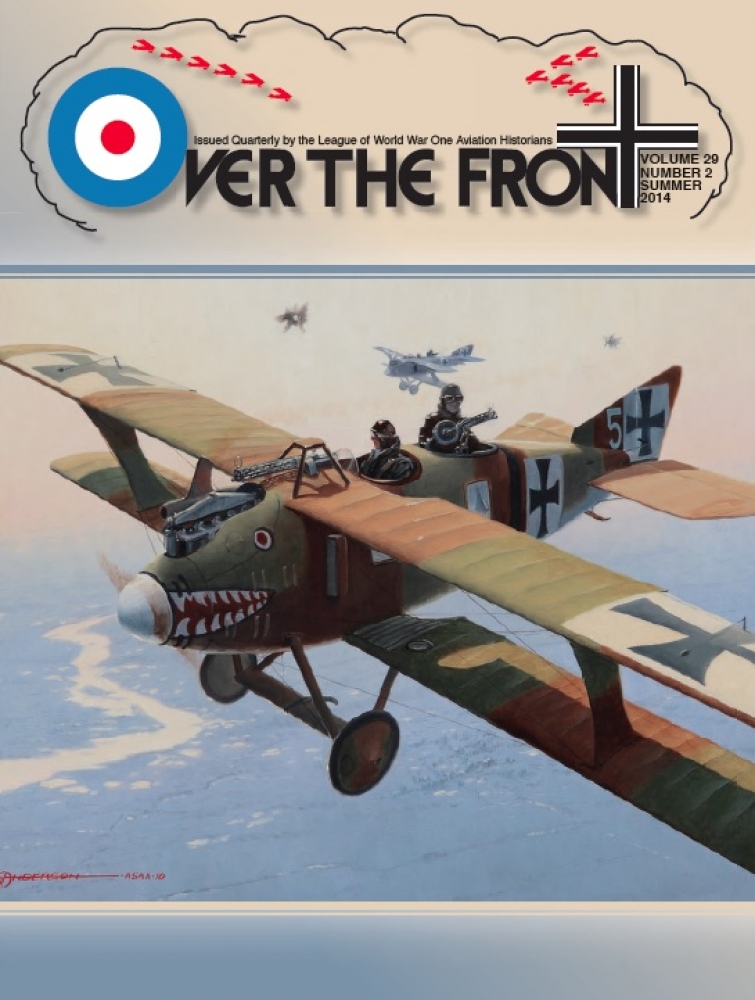 The Summer 2014 issue is the work of Issue Editor Dr. Hannes Täger, a noted WWI German aviation historian. As such, it features three articles with German topics: the life of Ernst Freiherr von Althaus, the third installment of observer Hans Joachim Seidel’s wartime journal, and the reminiscences of a researcher who interviewed WWI pilots, their mechanics and their families.

“The Lost Honor of Ernst Freiherr von Althaus” (by Hannes Täger, PhD) tells the real story of the controversial life of early Pour le Mérite airman Ernst von Althaus. It is based on Althaus’ diaries, interviews with his surviving family members, and the recovery of evidence that was once suppressed by German authorities in order to present him in a more purely heroic light. The author allows us to see him as he truly was: a courageous man and fighter who was nevertheless flawed by personal vices and became embroiled in criminal activites. It is a “must read” for anyone interested in viewing these men in real terms rather than as figures of hero worship.

“An Observer on the Front in Palestine – Part III” (by Michael Seidel) is the third in a series of installments featuring the wartime diary of observer Hans Joachim Seidel. It involves the period after Seidel’s service on the Western Front when he was sent to Turkey and the Middle East. Seidel not only describes the air activities there but also offers fascinating glimpses into what life was like for and among the native Arabs around Palestine – for example, his encounter with sheikhs, local women, and guides who escorted him on a camel caravan to seek out oranges for his comrades. One anecdote, supplemented by photos taken at the time, depicts the friendly and fairly unrestrained entertainment of two downed Australian fliers. One gets a sense that Seidel was quite open-minded and accepting of different peoples and cultures – a trait that no doubt served him well in his later life.

“Remarks on the Research and Study in Germany of the Markings and Paint Schemes of WWI Jagdstaffeln” (by Bruno Schmäling) is a summary of one researcher’s efforts to interview WWI pilots, their comrades and their families while they were still alive in the 1970s. The author first provides an account of the contributions made by such pioneering researchers like Erich Tornuss and Dr. Gustav Bock, who were responsible for preserving and disseminating much of the information we have on Jasta histories today, and how their torch was picked up by men such as Alex Imrie and Bill Puglisi in the next generation. The author joined them and devoted most of his efforts in contacting WWI pilots and their associates in order to determine the markings and paint schemes of individual Jasta units as well as of their pilots. His methods, varied sources and the interesting results of some of his firsthand contacts with these “old gentlemen” are given in detail. In the course of doing so, several personal anecdotes are related about men such as Paul Bäumer, Rudolf Stark, Victor Schobinger, and Josef Jacobs.

Our recurring feature, “Between the Bookends,” offers reviews written by such noted historians as Peter Kilduff, Steve Suddaby, Jim Streckfuss, Steve Ruffin, Jim Miller, and Carl Bobrowy with regard to 11 recent publications centered on World War I aviation.