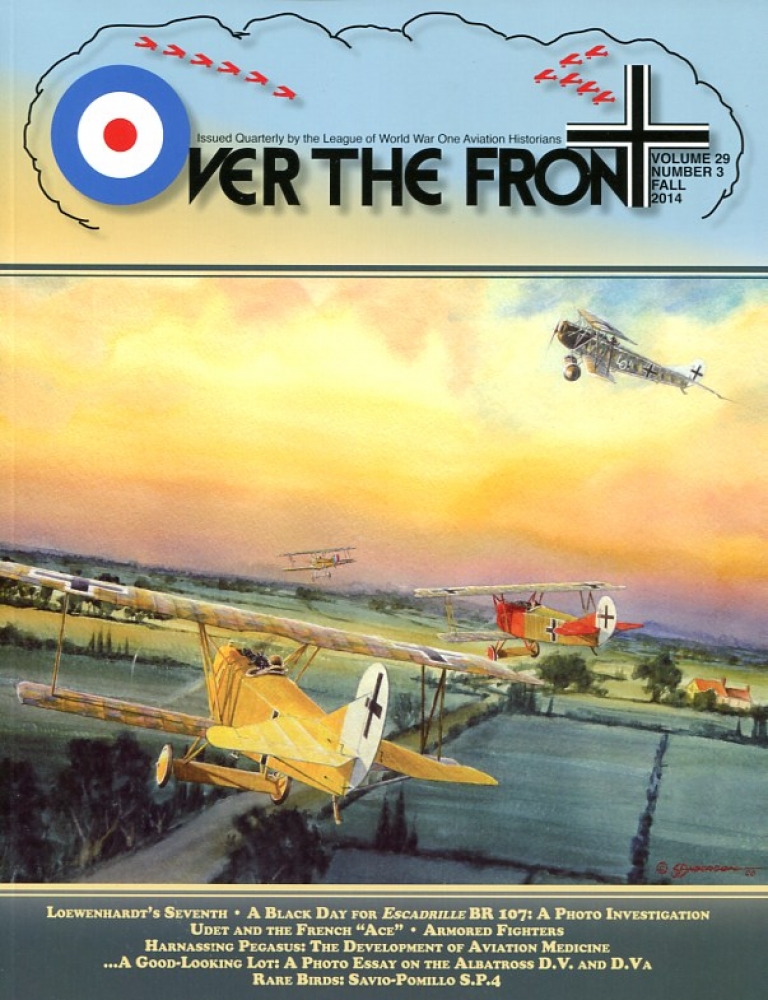 The Autumn 2014 issue once again presents articles on multiple aspects of World War I aviation:  the eyewitness account of a British pilot shot down by a German ace, a photo investigation of a French Escadrille’s downed aircraft, the tale of a fight in which a German ace was almost brought down by one of his countrymen, British and German efforts to create armored fighter planes, the beginnings of aviation medicine, a photo essay on the Albatros D.V/D.Va, and the history of a little-known Italian airplane.

“Loewenhardt’s Seventh” (by B.B. Perry, 22 Squadron RFC) is Perry’s own riveting account of the events that led to and followed his becoming the seventh victim of Jasta 10 ace Ltn. Erich Loewenhardt.  Perry, who survived the encounter, met and spoke with his victor, and was entertained by Jasta 10, offers many interesting insights into how enemies in the air sometimes treated each other on the ground.

“A Black Day for Escadrille Br 107” (by Greg VanWyngarden and Steve Suddaby) is an investigative work that examines the events, claims, and photographic evidence for a costly mission conducted by Escadrille Br 107 on 8 March 1918. Brief biographies of the Breguet crews involved in the action that day are also given.

“Udet and the French ‘Ace’” (by Werner Preuss, Jagdstaffel 66) relates the interesting tale of an encounter between several formidable German airmen and a decorated French ace – as told by one of its participants – that among other things, almost led to Ernst Udet being shot down by one of his fellow pilots. Editor Greg VanWyngarden examines the account and fills in the details, including brief biographies of the men involved in the scrap. The story of the French ace, Adj. Jacques Gérard of Escadrille Spa 65, is also explored and supplemented with rare period photographs.

“Harnessing Pegasus: The Development of Aviation Medicine During World War I – Part I” (by Dr. William Hannigan) examines how the effects of flight upon early aviators were first observed, recorded, and organized into a specific field of study. These early efforts, though sometimes as crude as the aircraft being used by their subjects, soon developed into a science that would benefit all future airmen.

“...A Good-Looking Lot: A Photo Essay on the Albatros D.V and D.Va” (by Greg VanWyngarden) offers numerous photos – some well known, some rare – of the ubiquitous Albatros D.V and D.Va models during World War I. The essay focuses on the widely varied and creative color schemes often applied to the types in the field.

“Rare Birds – Savoia-Pomilio S.P.4” (by Jack Herris) investigates the history and use of a little-known Italian airplane created by designers Savoia and Pomolio. Initially appearing in 1917, it carried a crew of three men and was powered by two tractor engines. Scale drawings are provided.

“Between the Lines” announces the 2012 and 2013 winners of the Thornton D. Hooper Awards for Editorial Excellence for OTF articles, “Mentioned in Despatches” describes a visit to the Golden Age Air Museum in Grimes, PA, and “Between the Bookends” reviews 20 recent publications centered on World War I aviation.