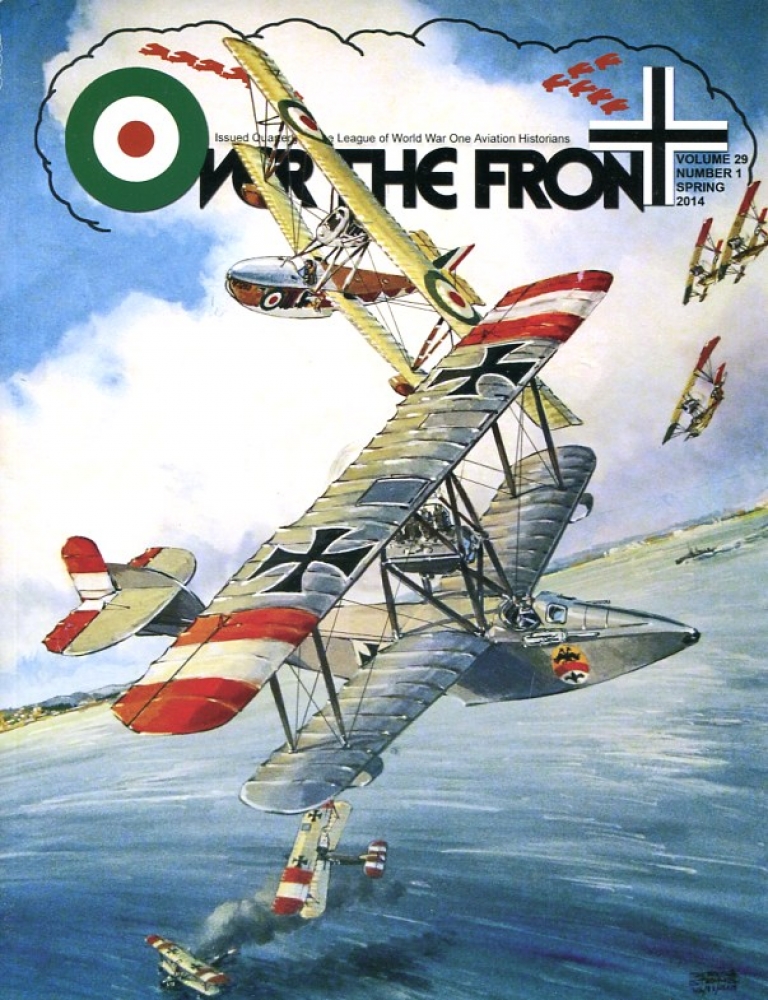 The Spring 2014 issue takes a look at multiple aspects of World War I aviation:  a battle between Italian and Austro-Hungarian aces, studies of three aircraft types, the evolution of one of the war’s most significant aircraft motors, a photographic essay featuring an aviation school’s facilities, and even a glimpse into how aviation materials were procured in Europe toward the end of the war.

“Battle of Aces Above the Adriatic Sea” (by Jim Wilberg) tells the story behind the cover artist’s dramatic rendering of the 4 May 1918 dogfight between Oarzio Pierozzi’s flight of Italian aircraft and Austro-Hungarian planes under the command of Gottfried Freiherr von Banfield. This battle of flying boats ended in an overwhelming defeat for one side, with two of their planes and pilots being captured and their best ace barely escaping with his life.

“The Albatros G.II & G.III” (by Peter Chapman) is a “Rare Birds” feature that examines two attempts by one of the war’s most prolific manufacturers to provide a Grossflugzeug (large airplane) type for bombing duties. The author discusses the reasons why those attempts failed and provides several photographs of the relatively obscure aircraft.

“A Short History of the Daimler-Mercedes D.III Motor” (by John Weatherseed) is an invaluable primer on the development of the highly successful D.III Motor that not only set the trend for future German inline motors but also influenced motors designed by Rolls-Royce and Liberty during the war. The D.III motor’s principal components and elements are reviewed in detail, supplemented by numerous photographs.

“Procurement of Aviation Material in Europe, 1917-1918” (transcribed by Colin Owers) is centered around a fascinating document held in the Naval Aviation Historical Center that traced American efforts to secure and supply raw materials for their air services in the final years of the war. The document exposes the problems and competition that often arose not only externally between America and her Allies but also internally among her army and navy.

“A Visit to LVG Part II, Köslin” (by Aaron Weaver) completes the photo essay on the Luft-Verkehrs-Gesellschaft (LVG) company’s Köslin facilities that was begun in our Summer 2012 issue (Vol.27 No.2)

“Mentioned in Despatches” informs our readers of several recent World War I aviation events organized by our colleagues in Germany, a symposium on American war volunteers being held in October, an unusual plaque honoring a wood production program that supported America’s material supply efforts during the war, and the identification of the pilot behind the markings adopted in Old Rhinebeck Aerodrome’s refurbishment of its Albatros D.Va. “Between the Bookends” reviews 12 recent publications centered on World War I aviation